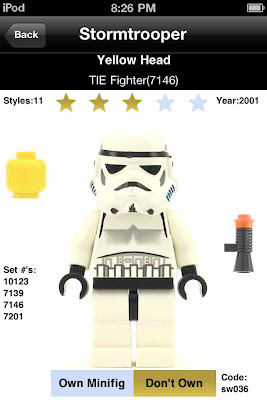 This is the detail screen you see when you click on a minifig in any of the lists. The name appears at the top followed by a short and simple description. The description's main purpose is to point any differentiating factors between alternate versions or styles of figures with the same name, but all figures have some description. This is a total count of all the different versions of that figure that have ever been released. To the left is the number of styles. Here there are eleven Stormtrooper styles. Some have different head colors, or shoulder pauldrons, backpacks, armor details, etc. The stars allow you to click on them and they turn gold as you select from one to five stars. You can slide across the stars or click on one. (Dont slide too fast or you might swipe to the next figure though). Once you have rated a figure it shows up in that section in the Favorites list. The year mentioned is the first year that style of figure was introduced. It could have appeared later as well, but this is just the first year. The set number and description under the figure description is simply just one of the sets the figure came with. This set number, and any other set numbers that included this figure, are listed to the left of the main figure photo. If the figure is wearing a helmet, has a head with dual sides (ie Zam or Lobot), or has an interesting head that is hard to see clearly, then the head is shown in detail to the left. On the right is a picture of the main accessory that comes with this figure. The app has over 40 different accessories included, ranging from spears to binoculars. Some figures come with different accessories in different sets, and sometimes its not clear if an accessory belongs to the figure or not, so this was a little subjective. Under the figure is a button that lets you pick if you own the figure (gold) or not (gray). The number to the right is a model number that can be used to reference the figure and is used by Lego fan websites such as bricklink.com, brickset.com, and others. 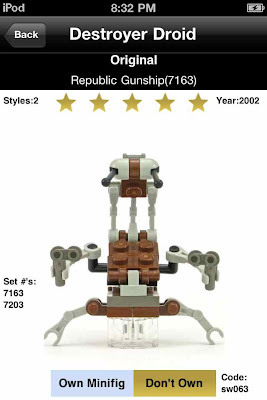 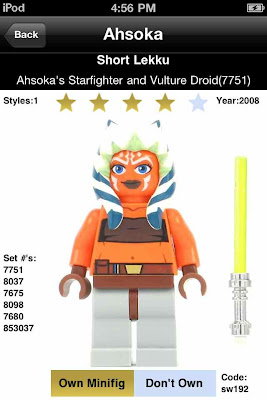 Posted by cherryhilltech at 6:59 PM