MyMinis is now a Universal App!

MyMinis is now a universal app that works on the iPad in full resolution, and works just like it did before on the iPhone/iPod Touch. Don't worry if you dont have an iPad. The functionality is the same on both, and when you get MyMinis you get both the iPhone and iPad version in the same download (thats what a universal app is). If you later get an iPad it will work fine and is free to install. I decided to keep it simple and just focus on making MyMinis work in all four rotations and keep the same design for the iPad version. However, since the minifig photos fill the entire screen on the iPad, they are as large as possible and you can make out a lot more detail since the figures are so large on the iPad. I think the iPad version is great for a brand new audience as well - very young children (age 1-2). They like to just look at the colorful images and have a parent change the photo from one figure to the next.
Posted by cherryhilltech at 7:22 PM No comments:

I bought all the summer sets and took out the figs, photographed them and added a new update. This update I think is really special because not only have I added 34 new figs, but also added a new database to the app that holds all the Star Wars sets. The new pics are all of a higher quality than the previous ones, and I also redesigned my lighting setup and got a better camera, a Canon s95. 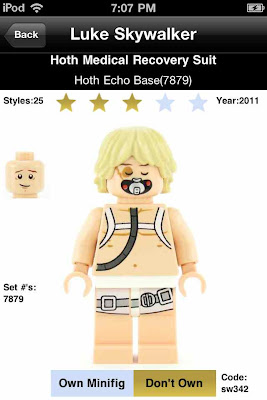 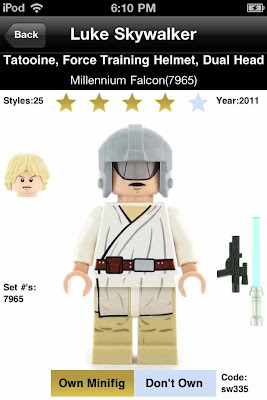 Posted by cherryhilltech at 6:14 PM No comments:

I got a whole box of 60 figs, dug through them, and wrote down what distinctive shapes there were for each fig that helped me the most, and what similar ones to avoid. The app store now has the updated app with all current Series 1-5 touchguides. The layout is sort of neat I think since all the figures are laid around the screen as buttons and you don't have to change screens to use a touchguide for a particular series. I hope the touchguide helps folks find them more easily. For me, the bump codes are impossible to figure out how to see much less figure out. At Series 5 they are useless since I heard there are now four combinations per figure. Touch is best way to go! 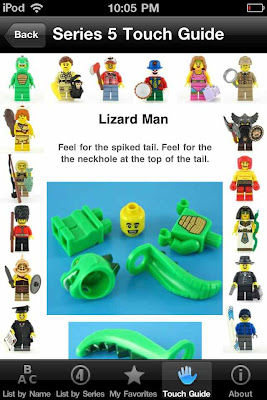 Posted by cherryhilltech at 6:05 PM No comments: